The 13 Fishing brand has made quite a splash in the fishing industry since it was founded in 2012. Many anglers are impressed with their reels as they are very well-designed and made of high-quality parts that help create an overall solid product. If you’re looking into the 13 Fishing Concept Z Reel and weighing the pros and cons or wondering what features this reel offers, keep reading.

We’ve done the research and testing to compile this article and explore some of the finer points of the 13 Fishing Concept Z and why it might be one of the most underrated baitcasting reels on the market today. 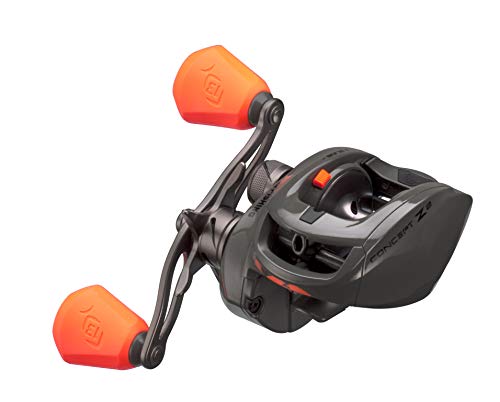 The 13 Fishing Concept Z reel was first introduced at the 2017 ICAST where it caught the eye of many avid fishermen and women, mainly because of its flashy bright orange color. Upon closer inspection, however, many anglers were highly impressed with this new reel and the wide array of features it brings to the table.

Now, four years later, there have been more than enough avid anglers who have purchased or tested the 13 Fishing Concept Z and have provided their views on whether or not it’s worth the money or if it can actually compete with such models as the Daiwa Tatula CT or the Shimano Curado 70.

One of the most surprising aspects of the 13 Fishing Concept Z is that it’s designed with no ball bearings. It’s common to wonder how a baitcasting reel can function with no ball bearings to lessen the amount of friction and ensure that the reel’s inner workings function to their fullest potential.

The lack of ball bearings actually plays a positive role as you won’t have to worry about the reel being susceptible to the same amount of saltwater corrosion that other models—who have a high number of ball bearings that aren’t shielded—typically incur. After using this reel, I can honestly say that it offers a very smooth casting action, as well as retrieval with a variety of lures.

Let’s take a look at some of the internal workings of the 13 Fishing Concept Z and how this reel manages to deliver one of the better performances among models that have few ball bearings, or even none in this case.

According to 13 Fishing, this reel was mostly designed for saltwater fishing around inshore environments. One of the most obvious concerns any angler has with a low profile baitcaster reel being used as an inshore fishing rod is the fact that saltwater can quickly ruin it’s internal parts in a relatively short amount of time. If you’ve ever heard that uncomfortable grinding sound coming from the interior of your baitcasting reel, you know how frustrating it can be to learn that you’ve unknowingly damaged your favorite reel without even realizing it.

Instead of designing the reel with the traditional type of ball bearings in the same location you typically find them in other reels, 13 Fishing made this reel with their Concept Zero Bearing (CZB) design. This CZB style of design replaces these ball bearings with a polymer material that’s meant to provide the same benefits you get from stainless steel ball bearings.

By making the reel without ball bearings, you eliminate the issues you commonly experience with other reel models that are significantly weighed down with these metal pieces. 13 Fishing also managed to avoid the pitfalls and weaknesses that typically come with poorly-made or faulty ball bearing systems.

13 Fishing is known for providing innovative features in their reels that stack up quite well against the competing brands like Shimano, Daiwa, and others. Here are some of the most notable features you’ll find in the 13 Fishing Concept Z Reel that make it one of the most intriguing models on the market.

The biggest concern for a lot of anglers when it comes to a relatively new style of baitcaster is whether or not it will have adequate durability—especially the question of whether or not it can hold up to the rigors of inshore fishing. The 13 Fishing Concept Z is made with a solid HD Aluminium frame that makes it very lightweight while also giving it ample toughness to handle bigger fish that will put a strain on your reel’s housing and internal components.

It’s absolutely important that any inshore fishing reel have the ability to withstand the rigors that are commonly associated with fishing in saltwater. 13 Fishing set out to make this reel one that blows away all the most common concerns anglers have with baitcasters and saltwater. The Ocean Armor II system is designed to keep the reel’s internal parts properly sealed and prevent any saltwater from working its way into the sections of the reel where they would normally cause significant wear and tear.

As we’ve already noted, The CZB technology was designed specifically by 13 Fishing to eliminate the usual concerns related to ball bearing systems. The new CZB polymer seems to do quite well over time and the majority of anglers who have used this reel for a few seasons are typically very satisfied with its overall performance.

Any modern baitcasting reel is expected to be equipped with some type of braking system, which is designed to cut down on those pesky backlashes that commonly occur. Even the most skilled anglers will experience at least one backlash about once every fishing trip, but average anglers might run into these problems much more often.

The 13 Fishing Concept Z is made with a 6-Way Centrifugal Braking system that’s specifically designed to help you adjust your braking pressure that is applied to the spool and prevent backlashes. You can adjust this braking system using the knob marked 0 through 6, which indicates that the brake system is applied more heavily as the number increases.

This allows you to adjust your braking system based on the weight of the lure you’re using. As most anglers know, it can be tough to get a feel for just how much they need to slow the spool with their thumb. Having a proper understanding of how this system works and how it can slow the spool (depending on your settings) will help you adjust the system at just the right level and avoid backlashing your reel so often.

Any inshore baitcasting reel absolutely has to have a solid drag system in order to deal with the bigger fish you’re hoping to run into every now and then. This Bulldog Drag System is designed with both steel and carbon washers to help increase the smoothness of the drag and provide enough strength to deal with those hard-pulling fish that are commonly found along coastal inlets and flats.

This drag is exceptionally smooth and powerful and is also capable of delivering up to 22 pounds of maximum drag weight, which is enough to help you land those big bull reds and other species lurking in the salty waters around the coast of your favorite shoreline.

Sometimes, a baitcasting reel’s side plates can be prone to loosening or even coming off when you don’t intend for them to. 13 Fishing sought to remedy this problem with another genius design by placing the plate hinges on the front of the reel instead of the back. The plate has a small connection that ensures that the plate won’t fall and risk being lost.

Anglers report that it’s incredibly easy to access this plate, remove it and make any needed adjustments without having to spend so much time with a traditional plate that’s often hard to remove and get back in place.

Another reason why the 13 Fishing Concept Z is so smooth is because it’s designed with Japanese-made Hamai-Cut gears. These gears are much higher quality than most of the others you might find in reels in the same class as the Concept Z. They are machine-cut with outstanding precision and provide exceptionally tight threads that won’t allow any play in the reeling action or handle.

The 13 Fishing Concept Z comes in four different models that offer a 6.6:1, 7.3:1 and 8.1:1 gear ratios. Each one of these ratios provide their own unique set of advantages, as many anglers already know. Casting this reel is incredibly smooth and you’re able to get quite a bit of distance out of each cast, especially with a heavier lure that you can launch using the right rod.

The reel only tips the scales at just 6.4 ounces, which is considerably lighter than ever the most well-made and intricately-designed premium lightweight models. This reel can be used with a wide variety of lures as it is smooth enough to crank spinnerbaits. Crankbaits, and other lures at a steady speed, whether you want to run it slow or fast.

Thanks to the higher gear ratio, it’s perfectly capable of taking up quite a bit of slack line so that you can better use topwater lures, finesse soft plastics, jerkbaits and other lures that require a slight pause between twitches or retrieving small amounts of line.

The 13 Fishing Concept Z offers plenty of reasons for anglers to take a closer look at this one and even purchase it to see what it really offers. The price is one factor that will likely turn away novice anglers who aren’t ready to drop a few hundred dollars on a higher-end baitcaster.

There are a few things that some have complained about, such as the fact that the reel makes a slight whizzing sound when casting lures that are slightly heavy. It also has been reported that some anglers don’t like the feel of the reel as they are winding in their lures and it takes some getting used to before you might feel as comfortable as you would with a premium reel from one of the more popular brands like Shimano or Daiwa.