When it comes to low profile baitcasting reels that are tough and strong enough to handle monster fish, you can typically expect to find some expensive options as engineering such products requires the best quality components. Abu Garcia is no stranger in terms of producing great quality low profile baitcasting reels and they are among the handful of companies that serious anglers trust to design and engineer a reel that can withstand the pressures associated with hard-pulling fish.

The Abu Garcia Revo Toro Beast Reel is one of the higher-quality options when it comes to low profile baitcasters that deliver in terms of serious power and drag. The reel certainly lives up to its “Beast” namesake as it gives anglers the ability to tackle monster fish in both freshwater and saltwater environments.

We’ve taken all of the Abu Garcia Revo Toro Beast Reel’s features and capabilities into consideration to compile this review and to also cover some of the points of interest that most anglers would have in relation to a reel like this. Keep reading to find out more about why this reel is built for cranking power and versatility. 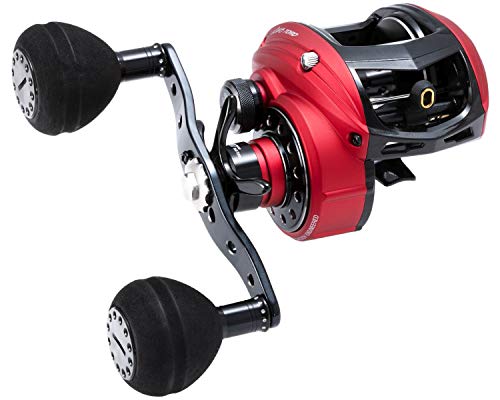 There are a few main concerns that serious anglers have when it comes to a baitcasting or spinning reel that’s geared toward handling giant, hard-pulling fish. The reel must have sufficient line capacity on the spool, as well as enough drag and cranking power to withstand the intense fights that all-too-often result in lesser quality reels coming up short and the fish going free. In order to reel in and land a large game fish like amberjack, redfish, striped bass or others, you need one that is made of solid materials while also being well-engineered.

The Abu Garcia Revo Toro Beast is a reel that is capable of delivering on all of these points and more. Anglers who have used this low profile casting reel for more than a few trips say that it has all the power, line capacity and drag necessary to land just about any fish you happen to hook, but it also includes some added perks. One of those bonus performance aspects includes the reel’s smooth casting and retrieval.

Compared to other heavy baitcasting reel, the Abu Garcia Revo Toro Beast Reel presents an exceptionally smooth drag coupled with great feel when casting and reeling. This is all a result of Abu Garcia’s intense efforts to ensure that the Revo Toro Beast is engineered and designed to give anglers what they need in terms of raw power.

When you take a closer look inside the Abu Garcia Revo Toro Beast Reel, it’s clear why it is rated as one of the best power reels on the market compared to other low profile baitcasting setups. In addition to having what it takes on the water, Abu Garcia also offers this reel in a left-handed version, which sets it apart from the vast majority of other power casting reels available.

A reel that’s designed to go after larger-sized fish and handle the extreme pressures associated with doing so is typically made out of heavier material than most others. The Abu Garcia Revo Toro Beast Reel is made with the brand’s specialized X2 Craftic alloy material. This unique metal alloy material is as tough as that of aircraft-grade aluminum, but lighter in order to alleviate some of the difficulty involved in casting and handling the reel.

This Special X2 Craftic alloy material makes up the body and side plates of the Abu Garcia Revo Toro Beast Reel, giving it plenty of rigidity and durability to handle both the strain of reeling in monster-sized fish, as well as dealing with the common corrosion issues that are often caused by fishing in saltwater environments. This alloy material is also coated with a titanium exterior to further strengthen its ability to withstand both challenges.

The reel is made for targeting large fish, but it weighs just 13.5 ounces and is packed with other notable features within this tough outer covering. The InfiniMax magnetic brake switch is situated on the reel’s lid, making it fairly easy to access and adjust whenever you need to while reeling in your catch.

The spool on the Abu Garcia Revo Toro Beast Reel is specially-made to allow you to have an excess amount of fishing line. This is an absolute necessity in terms of power reels that are meant for tackling the largest of the world’s game fish because you’re likely to have an exceptionally-large fish rip off more than a hundred yards of line on its initial run. Certain large saltwater game fish are known to do this several times before you’re able to get them near the boat as they tire out.

The spool is made of highly durable aircraft-grade aluminum and will withstand any amount of pressure you encounter from a fish in both fresh or saltwater. The spool works using an intricate system of bearings and other parts that combine to give the Abu Garcia Revo Toro Beast Reel its buttery-smooth action without taking anything away in terms of power.

The spool is capable of holding up to nearly 300 yards of 12 pound test monofilament fishing line and much more smaller diameter fluorocarbon or braided line.

The main reason why the Abu Garcia Revo Toro Beast Reel is one of the better power low profile baitcasting reels in the fishing industry is its Carbon Matrix Drag system. Without this important feature, it would be mostly useless in terms of having the ability to handle larger-sized fish that are expected to pull very hard on the reel and tear away dozens of yards of fishing line at a time.

The Carbon Matrix Drag system is advertised as having up to 25 pounds of max drag weight, but some anglers report that it’s actually a few pounds more than that. Abu Garcia is being slightly humble about the fact that their premium power casting reel is on the same level as some of the offshore casting reels that are designed for going after monster-sized fish. When the drag is at its maximum power setting, it still performs beautifully without the usual slipping issues that some reels have when an angler is reeling in a massive catch.

One of the more premium qualities about the Revo Toro Beast is the reel’s magnetic braking system. This intricate brake system operates using a axial brake on the handle of the reel while a magnetic brake helps to dampen the spool’s rotation from the upper lid. This braking system, compared to other low profile baitcasting reels, performs quite well and novice anglers can use it with relative ease.

The braking system utilizes 6 centrifugal weights on the spool that help to dampen the reel’s rotation and reduce the amount of excess line that’s being fed out from the spool through an axial brake regulator.

There is no denying that the Abu Garcia Revo Toro Beast Reel is made for catching giant fish and handles the task with surprising grace in both saltwater and freshwater. It casts very easily and effortlessly with most types of lures and rigs and the reeling action has a reputation for being one of the smoothest of any baitcasting reel in its class.

There are virtually no qualms in terms of the reel’s performance and anglers who demand the maximum out of their gear and equipment. The lightweight feel and action of the reel works well with its overall drag and functionality.

There’s no denying that anglers who want to fish with the Abu Garcia Revo Toro Beast Reel are going to have to shell out a few hundred dollars to do so. It’s understandable that most beginners or novice anglers wouldn’t want to spend that much on one single reel, but seasoned offshore and freshwater anglers who regularly go after the largest fish species on Earth should see the price as a reasonable deal. This is a solid reel that delivers on each of the most important aspects you need to have in terms of a baitcasting setup that’s geared toward reeling in heavy and hard-pulling fish.