The new innovations and technology that continues to hit the market each year has made it considerably easier for fishermen and women to locate fish at a very accurate level in almost any type of conditions. Gone are the days when anglers were forced to rely on their instincts and sheer knowledge of fish behavior when it came to finding just where fish are hiding. Now, there is a new type of tool that is quickly becoming a hit with anglers who want to have a real-time live feed video of what’s beneath their boat.

The Aqua-Vu 715C Underwater Camera is a device that can be used to not only pinpoint where fish are located at specific depths, but also eliminate the guesswork that many anglers have to do in order to figure out what kind of fish is showing up on their radar. This product officially launched a few years ago and has continually risen in the outdoor marketplace as a capable tool that gives anglers a never-before-seen advantage that anyone decades ago would only dream about.

There are many questions surrounding the Aqua-Vu 715C and we’ve compiled this article to answer as many of them as we can to give you a more clear understanding of what this underwater viewing device brings to the table and whether or not it’s worth the purchase. 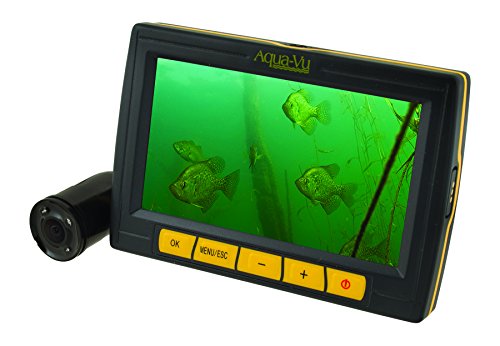 What is the Aqua-Vu 715C Underwater Camera?

The Aqua-Vu 715C is an underwater viewing device that’s capable of delivering clear, sharp footage of what’s happening below your boat at depths of up to 50 feet. It features a 7-inch LCD color screen display that’s also housed with protective material which is IP67 waterproofing rated. It operates with standard RCA video cables and is relatively easy to set up and connect to your boat’s electrical system.

This underwater camera operates using a 12v 7Ah battery that comes with Integrated Smart Battery Charger technology which lets you know when it’s fully charged, as well as helps you keep track of the battery life of your device as you’re using it on the water. Users will also have a soft-sided custom carrying case that they can easily fit the device and battery into, as well as the cables. This is very convenient for kayak anglers who don’t necessarily want to leave the camera system mounted to their boat when they’re not on the water.

There are plenty of features and display modes that come with the Aqua-Vu 715C that will get the attention of anyone who is relatively familiar with what to look for in a good underwater camera system. Plus, it’s priced at a rate that most anglers are able to afford, so this is a great model for anyone who’s looking to experiment with underwater camera systems on their fishing trips.

The Aqua-Vu 715C’s screen is among one of its most talked-about features that anglers see as an advantage over the competing brands and models that are available today. The screen measures 7 inches and is fully waterproof with a IP67 rating, which means the unit can be submerged or dropped into water that’s no more than about a meter in depth for time periods up to 30 minutes and still maintain the ability to function in most cases.

The screen offers full color resolution with an LCD display which means you’ll be able to see the underwater environment with exceptional clarity depending on the water conditions. Many anglers like to use this device to distinguish whether the fish that are showing up on their radar are a type of species that they are trying to target, or one that they aren’t interested in.

The camera is fully capable of also letting anglers get a solid view of what the structure or cover looks like under their boat, which comes in handy for avoiding snags and getting tangled on various objects. It’s more than bright enough to be seen at any point during the day and you’ll have no problem making out what type of fish or underwater structure you’re looking at in clear water conditions. The unit is also equipped with an adjustable Anti-Spook IR lighting system that helps to deliver optimal clarity in even the worst of conditions.

The device is compatible with a range of different accessories that will enhance the function and capability of the Aqua-Vu 715C Underwater Camera. You can use this camera with such accessories as Aqua-Vu’s XD Trolling Fin with Live Strike, which allows you to clip your line to the fin and keep it directly in front of the camera as you troll your boat along fishing for strikes.

This is an excellent way for anyone to capture great footage of fish biting certain types of lures that they might want to share in an edited video version later. The XD Trolling Fin with Live Strike can be used with a wide assortment of different lures that include spinnerbaits, crankbaits, live baits, soft plastics, and most smaller lures.

You can also use the Aqua-Vu 715C with the company’s XD Pole Adaptor. This accessory tightly fits the cable along the pole, which you can then use to probe in and around various types of structure, vegetation and cover. Most anglers prefer to use this device to peer underneath docks and carefully search for fish that might be lurking in areas where you might never detect them with most types of radar or sonar equipment. This is also another great method for capturing outstanding footage in moving current when the cable isn’t necessarily capable of keeping the device still while it’s in use.

Ice fishing enthusiasts can also make use of the Aqua-Vu 715C Underwater Camera by employing the Mo-Pod 3 Camera Positioning Tripod, which mounts the cable in a way that’s easy to set up and adjust.

The 50-inch cable is able to fully extend without coiling up or having unwanted kinks in it’s form that might hinder your ability to position the device. The camera itself simply hangs down into the water and the cable straightens as you carefully lower it into the water. Anglers can also make use of the XD Flood Light accessory for illuminating the dark depths at night, which can also work to bring fish closer to your bait or lure for a strike.

The camera is equipped with an Opti-RX Lab-Quality Lens that’s designed to deliver exceptional clarity at depths of up to 50 feet. This camera is perfectly capable of functioning in any type of water temperature and is ideal for anglers who like to capture footage of what’s happening underneath their boat or kayak.

The Aqua-Vu 715C’s camera is also fitted with a durable XD camera housing that helps to protect it against any minor impacts you might encounter underwater. One of the most commonly-reported problems that many anglers have had up until this point with underwater cameras is their lack of durability and tendency to break or malfunction due to contacting underwater trees, rocks or other types of structure as the boat is moving along through the waterway.

The possibilities are seemingly endless when you consider the fact that you can actually use the Aqua-Vu 715C to view anything in the water from above, next to, or even below to help provide you with a more comprehensive perspective on what kind of cover the fish are using and how you can better approach it with specific lure presentations and baits.

Being able to see the fish and their reaction to certain lures, colors, styles of presentation is an advantage that no other type of electronic device offers. With the Aqua-Vu 715C, you’re able to distinguish whether or not crappie are more interested in a certain color jig, view the bottom along a certain point in the lake and see if it’s rocky or muddy, or get an underneath view from a downed tree and see if the bass are hiding under the branches or coming out to chase shad and other prey.

It’s also easy to lower down this underwater camera and get a quick sense for just where a school of fish is in the water column and where they’re headed if they are moving or staying in the same relative location. Anglers who are looking to distinguish whether they are looking at carp or catfish instead of lunker bass will certainly find this tool to be quite useful in any environment, at any time of year, especially when fish are in the deeper sections of the lake.

The Aqua-Vu 715C Underwater Camera is available for just a few hundred dollars and can be a fraction of the cost that you might normally spend on a high-end sonar-equipped fish finder. If you’re a Youtuber or angler who prefers to capture their fishing exploits on camera so you can produce a well-edited video later on, this is a must-have item that will significantly boost the quality and diversity of your footage. As for the advantages that you’ll gain from being able to lower this camera down into the water and get an inside peek at what’s swimming around in the depths of a lake, river, or ocean reef, those should be obvious.