Trout are one of the most popular species of fish in North America as they can be found in cool mountain streams, rivers, or even lakes in some cases. There are several different species of trout that can be found throughout the United States and Canada, including brown, rainbow, and brook trout.

Most anglers prefer to catch trout with relatively simple methods of fishing and they are known for being somewhat harder to catch than most other types of freshwater fish species on the continent. Fly fishing is known as a very popular means of catching trout, but can also be difficult and take lots of practice for an angler to become proficient at.

If you’re like most anglers, you’re simply looking for the best way to catch trout that isn’t overly complicated. In this article, we will discuss some of the most effective naturally-occurring baits that can be used to catch trout.

If you are looking for trout lures then have a read through this article.

Worms are one of the most effective types of baits that can be used to bring in virtually any kind of fish species in freshwater lakes of North America. These creatures are naturally-occurring in almost every corner of the continent and fish will often not waste any time deciding whether or not they want to take a bite or pass it up.

It is believed that most fish will eat a worm simply because it taps into their instinctual urge to eat any sort of meal that presents itself to them. Trout, and other freshwater game fish species, commonly hang out around the shoreline while keeping an eye out for any worms or nightcrawlers that might wander around and find themselves in the water where they’ll be easy fish food.

As you’ve probably already guessed, the best strategy for using worms to catch trout involves using smaller worms that aren’t going to be too large for the trout’s mouth. Worms can be found in just about any bait shop or other store that sells fishing tackle or bait. If you’re not able to locate a decent store that sells worms, you can always use the old-fashioned way of getting bait by digging them up out of the ground yourself.

Our next item that is considered to be among the best baits for trout is easily one that can be placed in the No .1 space due to its overall effectiveness. Wax worms are not actually worms, but are the larvae of wax moths. Many times, these larvae are grown and harvested for the sole purpose of producing wax worms.

Wax worms can grow to about 1 inch in length and have a thick body that is easy for anglers to put a hook through. They are a great choice to use for trout fishing since they can be fished using a bobber and small split-shot sinker. Trout of all sizes will usually attack wax worms as they recognize these critters instinctually and know that they need to take advantage of what is typically an easy meal.

You can usually find wax worms at most bait shops, especially those that are near areas where trout fishing is popular. They can also be found at most pet shops since a number of different small pets like rats or hamsters tend to eat wax worms. If you use these to catch trout, you’ll only need a small hook and sinker, as well as a bobber.

There are some artificial baits that can work just as well as any naturally-occurring one. Among these kinds of baits are Berkley PowerBait Fishing Soft Bait. These unique types of bait are made to closely resemble fish eggs that are clustered together and can be hooked and thrown into the river or stream to tumble down along with the current and draw bites from hungry trout.

This type of Berkley PowerBait comes in a huge variety of sizes, as well as colors. These can be used at almost any time of year, but they are most effective after the spawn when trout and other fish know that there will be eggs in the water and will be looking for them. 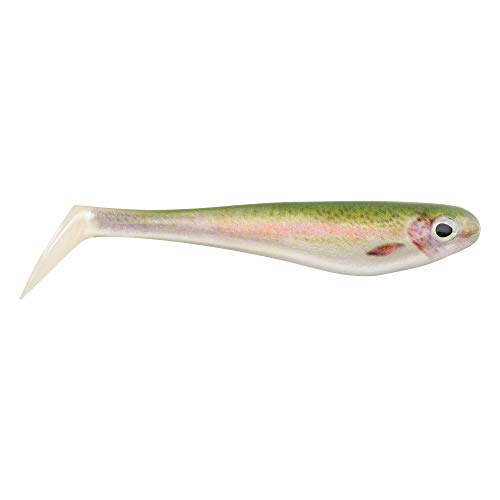 When it comes to selecting a good type of artificial bait that get the attention of trout, Berkley PowerBait Natural Scent Trout Bait is another great option that is highly effective. This particular type of bait comes in a corn yellow coloring that looks virtually indistinguishable from actual corn. If you’re fishing in streams or rivers where trout are usually fed corn or others use it as bait, this can be a solid choice of bait.

You can easily get as much of this Berkley PowerBait dough and ball it up with your fingers before pressing and molding it around your hook. This type of bait will stay on the hook much better than actual corn and will ultimately be very effective at catching trout. This dough is scientifically developed to have certain scents in it that attract trout to feed on it. 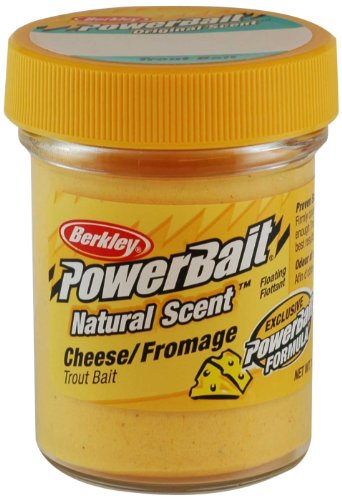 As you might suspect, minnows are among the best bait for trout fishing as they usually are effective at getting trout to bite when all other kinds of bait seem to have poor results. This is because trout, like most other game fish species, often have an instinctual reaction to seeing minnows in the water as opposed to other types of bait or artificial lures.

If you do choose to go with minnows on your next trout fishing trip, be sure to get the small size minnows since smaller trout are more likely to bite at a minnow that is much smaller and not too large for them to fit in their mouth. There are different types of minnows and most bait shops near popular trout streams or lakes will probably sell them by the dozen.

Minnows work great for ice fishing or trying to catch trout in slow-moving rivers. There are a number of artificial minnows that are quite effective like the Berkley Gulp Soft Bait Minnows. While these are good for times when you can’t find any actual minnows, there’s no denying that real minnows are one of the most productive baits for trout.

Another great option among artificial products that are some of the best baits for trout are Berkley Gulp Floating Salmon Eggs Jar. These small, but very effective bait balls are virtually the same as the Berkley PowerBait dough in many ways, but also have some clear differences that make them better suited for certain scenarios.

These floating salmon eggs come in three distinct colors that include fluorescent red, orange, and yellow. They are made to look identical to real salmon eggs and trout will usually attack them out of pure instinct as they appear to be another easy meal that trout simply can’t pass up. One of the only downsides to using this type of bait is that the bait balls will lose their potency faster than the Berkley PowerBait will in most cases. 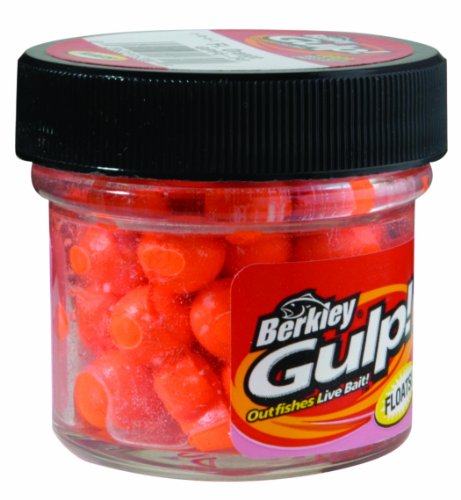 Shiners are very similar to minnows, but are a different kind of bait fish that have a few distinct differences. While minnows are small bait fish that have slightly darker coloration along the top of their body, shiners are known for having especially shiny sides that fish are able to spot from a very long distance.

Trout live in freshwater streams and rivers that are exceptionally clear and cool, which is essential for them to thrive. They, like other types of fish, rely on their keen sense of sight to spot certain types of creatures that might make a great meal. Trout that are able to spot a shiner darting around in the water will usually move in for a closer look or even try to eat the fish.

Shiners are usually about 2 or 3 inches long and they are known for being a great choice for anglers who are looking to catch larger-sized trout since the smaller ones are less likely to attempt to eat them.

Another solid type of artificial trout bait that can easily be used in a variety of ways is Berkley PowerBait Power Nuggets. These small and distinct-looking bait nuggets are mostly designed to appeal to the trout’s sense of smell as they are said to be loaded with scents that are scientifically proven to appeal to the trout’s senses. The rainbow coloration also works to appeal to trout’s sense of sight as the fluorescent coloration pops out from the other,  naturally-occurring items found in a typical stream or river. In other words, trout will see this and likely move in for a closer look or a bite as it appears to be something that might resemble an egg or other type of food.

You can manipulate these trout nuggets and break them down into smaller pieces, or combine them to form larger balls around your hook. Many anglers note that stocked trout tend to go after these types of artificial baits as the nuggets and their unusual color look very much like the colored feed that hatcheries feed their trout throughout their lives before releasing them into streams and rivers. 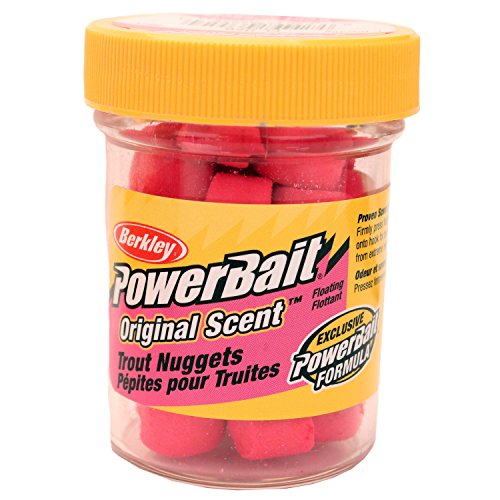 One of the most popular types of live bait across much of the United States are crickets. These small, but lively creatures can be found in a variety of different environments and fish, including trout, will not hesitate to make an easy meal out of them. Crickets can usually be found in abundance at local bait shops where they are typically one of the most affordable kinds of live bait you’ll find anywhere.

Crickets attract trout most when they are fished without a weight and can skirt around on top of the water’s surface. This helps trout notice them as their movements across the surface are distinctive and work to tap into a trout’s instinctual drive to chase down and engulf an easy meal.

If you can’t find crickets at your local bait shop, you can always try finding them in their natural habitat, which is underneath or around piles of debris or logs and leaves. One of the only downsides to using crickets is that trout can easily pull them off your hook, which will require you to regularly put a fresh cricket on your hook.

The next listing on our best bait for trout lineup could easily be lumped in with crickets, but we chose to place them just below their natural cousins because grasshoppers are found in greater numbers than crickets and are very effective when it comes to catching trout. Grasshoppers can be found in a variety of sizes and it’s sometimes better to experiment and see which size or type of grasshoppers the trout in your stream or river prefer.

The main downside when it comes to using grasshoppers is that they are not sold in bait shops or stores. If you want to use these as bait for your next trout fishing trip, you’ll have to do a bit of work beforehand and catch them yourself in your yard or any open field with lush grass.

If you use grasshoppers for trout, the best way to rig them is virtually the same as you would a cricket. Hook the grasshopper through its back so that it can still walk to swim across the surface of the water with its legs. Trout will be attracted to the sudden desperate movements of the grasshopper’s legs as it tries to get out of the water and towards land.