For anglers who are looking for a reel that’s both lightweight and exceptionally tough, the Daiwa Exceler spinning reel is one that certainly deserves a closer look. This reel is made with more of a minimalist approach from the design and engineering experts at Daiwa to perform better than almost any other reel that’s similarly priced.

In fact, the Daiwa Exceler is often compared in performance and capability to some of the most high-quality premium reels that are on the market today. The reel’s lightweight carbon material construction give it an extremely comfortable feel that professional anglers often prefer due to the fact that it’s so much easier to fish with throughout the day without getting fatigued.

Each of the Daiwa Exceler’s internal components are made with very high-quality parts and designed to be tougher than the competition in terms of the drag and other things like the ball bearing system or spool. Anglers who are in search of a lightweight spinning reel that’s capable of stacking up well against some of the top brands in the industry will find that this one offers plenty of things to like. 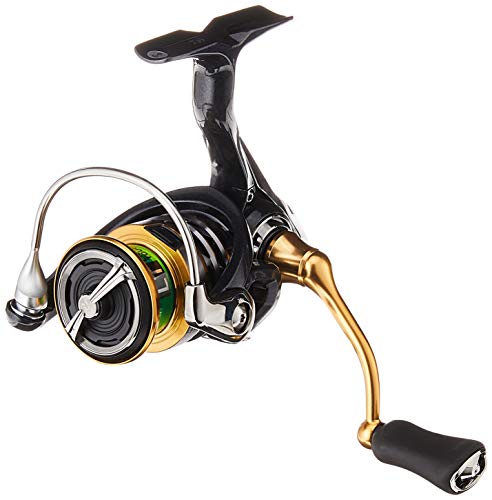 The Daiwa Exceler spinning reel is made to function as a lightweight and tough model that performs much like you would expect a premium model to. It’s made specially for freshwater use as it doesn’t offer the same corrosion-resistant capability that other Daiwa reels have. The reel’s action is exceptionally smooth compared to most other brands and models of similar size and price.

The Daiwa Exceler is equipped with a drag system that is strong enough to handle almost any type of freshwater fish. It’s ideal for bass and other medium-sized freshwater game fish and offers one of the most lightweight feels of any spinning reel that Daiwa has in its current lineup. The carbon composite body and housing are much lighter than your typical spinning reel construction material, giving the Exceler a more comfortable feel in the hands of anglers of all skill levels.

It’s easy to compare this reel to some of the premium models offered by other brands, but considering the Daiwa Exceler is priced at less than $100, it’s one of the best value reels currently on the market.

One of the central features of the Daiwa Exceler is the Carbon Lite Material Housing. This specialized carbon composite material is designed to function much like aluminum does in terms of durability and toughness, but weight significantly less than any metal material that is currently being used in the production of spinning reels.

The Daiwa Exceler comes in a variety of different size options in relation to the spool and each one weighs anywhere between 6.4 and 8.4 ounces. These spinning reels are exceptionally lighter than most others on the market this year and the carbon lite material housing is somewhat comparable to aluminum material in terms of weight and toughness.

In recent years, Daiwa has become known for producing some of the most precise gear systems of any other brand that makes baitcasting or spinning reels. Having a solid gear system in a spinning reel translates to an overall better functioning product that is much more smooth and precise than a lesser quality gear system.

Daiwa uses its patented Digigear Digital Gear Design system that is made through a process of using incredibly precise machine cutting gear to specifically manufacture every part of the gear system so that it fits perfectly with the adjoining parts. This precision machining helps to increase the sensitivity of the reel’s overall function since you’ll be able to feel fish pulling against the reel much easier than you would with a more loose set of gears in a lesser quality reel.

The Exceler uses a 5+1 ball bearing system that is made with very high quality stainless steel bearings. This helps to contribute to the reel’s overall smooth action by cutting down on the amount of friction produced when the angler is casting or reeling in the line.

One of the most important things to have in a spinning reel that features a larger spool size is a gear ratio that is based on power. This allows you to gain more traction on the line as you reel it in, no matter how large the fish on the other end is. Higher gear ratios are more favorable for using certain lures like topwater or others that require you to pause your retrieve and take up significant amounts of slack with each turn of the handle.

With a more powerful gear ratio, you’ll be better equipped to crank the handle and prevent having fish pull away from the drag system very easily. The Daiwa Exceler comes in four different size options that feature a 5.2:1 gear ratio. This includes the Exceler 1000, 2500D, 3000D, and 4000D size options. Other models often feature a 6.2:1 gear ratio that is more suited for using with lighter lures.

The Daiwa Exceler is packed with other impressive features that contribute to why so many anglers view this as one of the best lightweight budget-friendly options on the market. The reels offer a machined aluminum handle that is much stronger than other types of material. Being made of aluminum means the handle is less likely to loosen, which could cause problems in your retrieve or reeling in your catch.

The reel also offers an extremely lightweight rotor system that’s specially designed to distribute the pressure on the reel more evenly as the line is spooled on. The Daiwa Air Rotor is truly revolutionary when it comes to enhancing the overall lightweight feel of the reel as compared to traditional models that feature a heavier rotor component.

The Daiwa Exceler is one of the most lightweight and comfortable spinning reels the brand has made in years and it offers much of the same feel you might expect with a premium model. The reel is exceptionally easy to use and each of its components are very well made, especially the internal gear system. The only major downside to this reel is that it is not made to deal with the corrosive tendencies of saltwater fishing. This is easily one of the best value spinning reels on the market today.