Daiwa has long been at the top of the fishing industry in terms of producing top-notch fishing reels for competitive and recreational anglers. In recent years, the company has gone above and beyond what was needed to create some truly exceptional reel models that stand out from the competition. Among these reels is the Daiwa Lexa Baitcasting Reel.

The Daiwa Lexa series comes in a variety of different sizes that include the Lexa HD, Lexa 100, and the Lexa 300 and 400 reels. These reels feature a very powerful gearing system that is made to withstand any game fish you might catch, while also offering an exceptionally lightweight design that gives this reel an excellent feel in the hands of any angler.

There are a number of high quality features that set the Daiwa Lexa series apart and I will take a closer look at each of the main ones in this article, as well as explain how these features and performance upgrades will benefit you on the water. 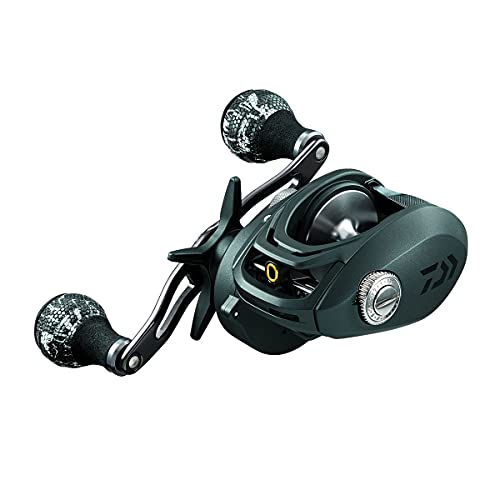 The Daiwa Lexa is perfect for both saltwater and freshwater anglers. This reel series comes in smaller versions that are ideal for freshwater species like bass and musky while the larger Daiwa Lexa 300 and Lexa 400 are more well-suited for targeting larger saltwater species of game fish that are known to require a seriously tough reel to land. The Lexa has a very strong drag system with the 300 and 400 models offering 22 and 25 lbs of drag, respectively.

The Ultimate Tournament Carbon Drag system is the central feature in these reels and it will allow you to confidently go after the largest fish species without fear of your drag not holding out. The Lexa is also made with a special ball bearing system that makes casting, retrieving, and reeling in your catch exceptionally smooth compared to other reels that are similar in size and style.

The Daiwa Lexa is one of the more expensive baitcasting reels offered by the brand, but anglers who are well-acquainted with this company are likely to be well aware that the reel is loaded with high-quality features that make it worth the extra investment.

The Ultimate Tournament Carbon Drag System is one of the most talked-about features of the Daiwa Lexa as it is stronger than most other drag systems that the brand has produced in recent years. Tournament anglers require the best from their equipment and having anything that’s not reliable is simply not an option. Daiwa named this drag system the Ultimate Tournament Carbon Drag System in order to appeal to competitive anglers who rarely waste time on inadequate reels that won’t cut it when it comes to landing a trophy fish.

This drag system operates using oversized carbon drag washers that help to add extra strength on either side of the spool. This means the pressure that’s put on the spool will be more evenly dispersed, no matter which direction the fish dives and pulls toward. The drag system delivers a very smooth drag that won’t become bogged down if the fish tends to pull too hard for an extended period of time.

Another highly sought-after feature of the Daiwa Lexa series baitcasting reels is the Corrosion-Resistant Ball Bearing System. This bearing system operates using a 7 ball bearing system that includes two corrosion-resistant bearings, four ball bearings, and one rear bearing. Each of these bearings are made of exceptionally high quality stainless steel that’s designed to last up to 12 times longer than the average type of ball bearings that are commonly used in baitcasting reels of other major brands.

This means you’ll get a significantly longer lifespan out of this reel if it is taken care of properly, whether you’re fishing in saltwater or freshwater.

Another great feature of the Daiwa Lexa baitcasting reel series is the Magforce-Z, which is specially designed to help prevent backlash and tangles by using a magnetic braking system that slows the spool down before it hits the water. Backlash is one of the main problems anglers deal with when it comes to using baitcasting reels and Daiwa is at the forefront of going through extra efforts to prevent this problem and save you massive amounts of time on the water.

The Magforce-Z system is designed to spool more freely as soon as you make your cast and gradually slow the spool as the line extends out from the reel. It will also automatically apply the braking system on the spool toward the end of the cast after several dozen yards of line has been spooled off the reel. This braking system is mostly designed to prevent the potential that you’ll have to deal with backlash, which is one of the most frustrating aspects of fishing with a baitcasting reel.

Each reel in the Daiwa Lexa series is made with a specialized aluminum frame construction that helps to add to the overall strength and durability of the reel itself. The reel’s frame and side plates are each made of this high-quality aluminum material without adding too much extra weight to the reel’s overall feel. This is very important for anglers who will be using the reel for long hours at a time since heavier baitcasting reels can often cause the forearms and wrists to become fatigued more quickly and lead to you missing bites due to slower reaction time.

Another feature that deserves to be mentioned is the gearbox that’s located below the rod handle. Daiwa moved this gearbox to a lower position in order to allow the spool to be closer to the center of the rod. This gives a much more comfortable feel that fits into the hands of the angler much more easily.

The Daiwa Lexa Baitcasting reel series is one of the smoothest to come from this brand in recent years. The wide variety in different size options allows anglers of all skill levels and backgrounds to choose the one that’s just right for them, whether that’s for freshwater fishing, or going after the largest saltwater game fish species such as tuna and other sportfish.

The reel’s braking system is also a welcome addition that helps to greatly reduce the potential for backlashing the reel and ending up with a massive tangle that can steal significant amounts of time away from your efforts to catch fish. If you’re looking for a heavy-duty baitcasting reel that’s incredibly smooth, the Daiwa Lexa is a great pick.