Humminbird has been in the running for the best fish finder models year in and year out since the company was founded in 1971. Their products include some of the more advanced fish finders that are commonly used by fishing charters and guides, as well as professional anglers looking to get a leg up on their competition.

The Humminbird Solix 10 is a new breed of fish finder with plenty of impressive features and capabilities that anglers of all skill levels can appreciate. It features an easy-to-use touch-screen interface and things like HD Radar that helps open up an entirely new way to look at navigation and what’s beneath your boat.

In this article, we’ll take a closer look at the features offered in the Humminbird Solix 10 and detail just how each one can benefit you as an angler in both freshwater and saltwater fishing scenarios. 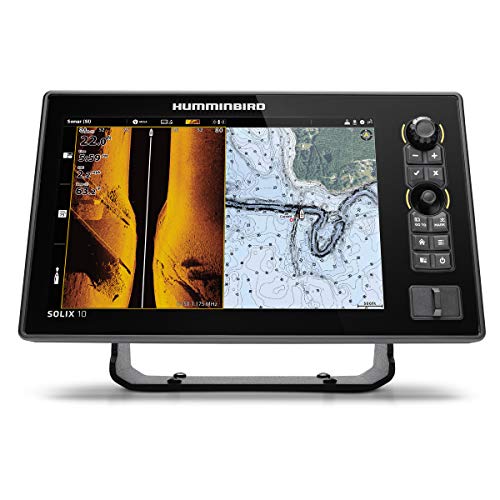 The Humminbird Solix 10 was first released in 2017, it redefined what it meant to incorporate solar technology into fish finders. The device is incredibly easy to use and features a litany of impressive components and capabilities that far exceed what most other fish finders are able to do on the water.

While this is one of the more affordable options among fish finders that offer touch-screen interface, it’s still well outside the price range for many anglers. However, for serious fishing enthusiasts who want to step up their game considerably when it comes to finding and locating fish, the Solix 10 is an outstanding choice that won’t disappoint.

This device uses features like Broadband CHIRP Sonar technology, along with HD radar and many other things that are sure to pique the interest of anglers looking to get the most out of their electronic devices.

Knowing what’s beneath your boat is critical to locating and targeting the kind of fish you’re after on any given day on the water. Until very recently, anglers only had the capability to look downward directly beneath their boat with their electronics. Recently, the innovative use of SideScan sonar has helped anglers expand their area of visibility to see what’s to their left and right as well.

Now, The Humminbird Solix 10 has unveiled HD Radar technology that also allows you to detect what’s in the water in front of your boat, in addition to the other areas that are typically scanned. This is a major breakthrough that brings an entirely new facet to anglers who commonly spend a certain amount of time each fishing trip motoring around, searching for a school of fish, or specific types of structure underwater.

HD Radar is also a significant upgrade in terms of safety as you’ll be able to detect what’s in front of your boat on the surface as well. This will let you have some ability to understand your whereabouts and be able to avoid dangerous objects in the water or on shore, especially on mornings or evenings when the water can be extremely foggy.

The implementation of Broadband CHIRP Sonar is another one of the Solix’s more impressive new technological advancements over previous models. Most fish finders today are using CHIRP sonar technology, which is basically designed to send out multiple signals at a time instead of just one. This multitude of signals helps provide a more clear image on the screen and lets you know whether you’re looking at a brush pile or a tightly packed school of fish.

The Broadband CHIRP Sonar sweeps across many more frequencies than your usual CHIRP technologies. This broader sweep across more frequencies allows the CHIRP system to develop a more comprehensive image of what’s below your boat. You also have the capability to adjust the sensitivity of this feature to pick up different levels of image quality.

The screen itself is a 10.1-inch display that offers a wide range of color depth, as well as incredibly sharp images thanks to its 1280H x 800V pixel resolution. The LED backlight screen can be adjusted to several different settings, allowing you to get the right level of brightness for exceptionally sunny days, as well as dark nights when you might want to decrease the overall brightness of the system.

The Solix 10’s SwitchFire feature is an all-new concept that truly makes a difference for anglers who fish in a competitive setting and might spend many days at a time on the water. Using this feature, you can adjust the device to operate under CLEAR or MAX modes.

CLEAR mode is used to help eliminate extra noise and other outside factors caused by your boat sitting in extra choppy water on windy days. The MAX function is designed to allow your detection systems to work at their maximum capacity on very calm, clear days. Using MAX function, you’ll be able to maximize your device’s sensitivity and detect even the smallest differences in what’s below your boat.

Like any good fish finder, the Humminbird Solix operates using a highly sensitive GPS location system. This GPS module is much more sensitive and capable of detecting your exact location down to just a couple feet on any waterway in most of North America. This function allows you to view your boat’s speed and navigate with ease.

One of the most pivotal factors of the Humminbird Solix 10 compared to other fish finders is the ability to connect to your smartphone, tablet, or any other Bluetooth-enabled device. Using this capability, you can quickly glance at your phone’s screen to check your location or take a quick peek at what’s underneath your boat to ensure that you’re still hovering over the specific structure or school of fish you are aiming for.

Freshwater anglers can typically get by with any fish finder that has the ability to read down to 1,000 feet. However, the Solix 10 utilizes Xtreme Depth Technology to read well past that mark down to 5,000 feet with exceptional clarity. This is extremely useful for offshore fishing guides and competitive anglers who need to rely on their electronics to locate fish before expending time and energy trying to catch them at significant depths.

The Humminbird Solix 10 is a solid option for anglers who are looking to step up their performance on the water by using an upgraded device. This fish finder is what many professional anglers consider to be mid-level, but for anyone who has been using an outdated device for a number of years, the new technology and capabilities are sure to surprise you.