The Lew’s Mach II was recently released to serve as an even-faster version of the wildly-popular Mach 1 reel model that was released a few years ago. Lew’s is very well-known for making baitcasting and spinning reels that are almost perfectly aimed at a specific target market of anglers who are willing to spend a bit extra on a great quality reel, but might not want to shell out hundreds of dollars to do so. The Lew’s Mach II, like its predecessor, is virtually packed with impressive features that will grab the attention of any angler.

The reel is just a bit more expensive than the Mach 1, but it does offer some of the same basic features. One of the main differences is obviously the lightning-fast gear ratio, which burns lures in at an astounding 7.5:1 ratio. This is ideal for pitching jigs around docks and other types of heavy cover, as well as using topwater lures like poppers and frogs that you’ll want to vary the rhythm in your retrieve with. This reel is comparable to the Abu Garcia Pro Max, but anglers will likely gravitate toward the Lew’s model in a head-to-head decision thanks to all of the premium features this reel offers.

In this article, we will closely examine these features to help you determine if the Lew’s Mach II is an ideal fit for you on the water. If you’re looking for a super fast, low profile baitcasting reel, this model is certainly worth your consideration. 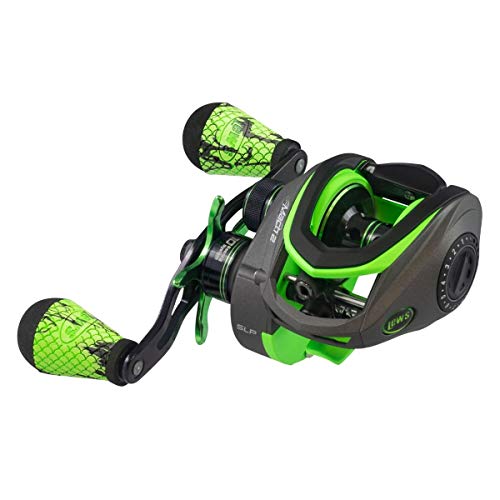 The main feature of the Lew’s Mach II is obviously its ultra-fast retrieval design. The reel obviously draws its namesake from the speed rating at which fighter jets are measured, with the Mach II being just a bit faster than the Mach 1. In addition to the obvious super speed capability, the reel does feature quite a bit more capabilities that make it a solid choice for serious anglers who demand a solid performance out of their gear and equipment.

This reel has been adequately compared to the Mach 1 as being virtually identical in every way except for the oversized handles and faster gear ratio. While this is partly true, there are a few other notable additions that Lew’s has made to an already great speed spool reel model. This American-made reel is one of the best-selling models in the United States over the last year and it’s easy to see why when we take a look at just what it offers under the hood.

It’s a highly-adjustable reel that features the same type of magnetic braking system as the Mach 1, only with more capability to properly monitor and adjust the speed of the spool during your casts. This is a major difference-maker when it comes to guarding against backlash and other tangles that so often happen when we aren’t paying attention or let the spool get away from us at the end of the cast.

The Mach II is made to deliver the same buttery-smooth action that the Lew’s Mach 1 is known for. It does incredibly well with most types of line spooled onto the reel, including braid. Most users will likely opt for mono or fluoro, but in either case, you’ll have no problem casting your lure out to a considerable distance or with great precision. The smoothness of the retrieve is what truly makes the 9+1 ball bearing system shine.

One of the first areas of concern anglers have with any reel is the overall durability it offers. This is one aspect where the Mach II might fall just a bit short of its competitors. The reel weighs less than the Mach 1 at just 7.2 ounces, but Lew’s was able to achieve that by using graphite material in the reel’s housing and side plates. This material is not overly concerning, but it is a bit less durable than some others that could have been used.

What Lew’s did achieve with the use of lighter graphite material was an incredibly comfortable reel that feels really good in your hands. The Mach II is the type of model that you can easily fish all day without much fatigue in your forearms and wrists, which tends to happen quite often for competitive anglers.

The reason for this lightweight graphite material is likely to give anglers a much greater level of comfort in using this reel as one that’s specially geared toward pitching jigs and other lures into cover or around docks. This technique can be especially taxing on the arms and wrists and having a reel that’s lighter goes a long way in your overall comfort level and performance. Essentially, you should be able to pitch jigs and other lures for a longer amount of time before you’ll get tired and need a break.

Many brands in the fishing industry produce reels that offer just a handful of bearings that are incredibly smooth. This has given rise to the realization that more ball bearings is not always going to equal a more smooth performance. However, it can in some circumstances where the bearings are made of exceptionally strong material and arranged in a precise manner inside the reel. The Lew’s Mach II is certainly a model that can be described as smooth by any angler that handles the reel.

It’s 9+1 ball bearing design is made with the same stainless steel double shielded ball bearings that the Mach 1 is known for having. These hardened bearings do an incredible job at cutting down on the overall level of friction that’s created in each cast. The reel features a single Zero-Reverse one-way clutch bearing that’s specially made to stop the reel from unspooling when you are working to keep it on the spool. This is very useful in the event that you’re fighting a sizable fish and might worry about other reels giving up too much line when you’re in the middle of the fight.

One of the other more popular features that Lew’s is often known for is their well-made gear systems that are precisely-cut to give you great performance and power, despite the Mach II being a reel that’s really made for speed more than anything. You’ll probably have no problem powering down on a fish when you need to with the Mach II as this gear system is incredibly well-constructed and is not one that’s known to malfunction and allow the internal mechanisms to jam up.

The reel is made with high strength solid brass Speed Gears, which are specially designed to give the reel better performance when you might be burning the handle up with a fast retrieve or a series of pitches into an area with thick cover. These Speed Gears are CNC machined with Hamai technology, which means they are a bit more advanced than what most other brands might be using in their gear systems.

One thing you can count on with the Lew’s Mach II gear system is the fact that it is reliable. You won’t find many anglers complaining that their reel’s internal gears have loosened like you might with other brands and reel models.

In today’s fishing industry, anglers almost automatically expect any reel that costs more than $100 to have some type of braking system that is designed to help slow down the rotation of your spool during casts. These braking systems can make a world of difference in whether your reel is more prone to being backlashed, or if you can rely on it to slow down on the end of your casts just before the lure hits the water.

The reel’s magnetic brake system is externally adjustable and allows you to tweak the level at which your brake is applied to each cast. Each angler might want a brake level that’s more or less depending on their comfort level with using the reel and confidence in their ability to properly apply their thumb to stop its rotation.

As we’ve already noted, you’ll find many of the same features in the Mach II as you get with the Mach 1. These features are what help set the Mach II and it’s sister reel, the Mach 1, apart from other high speed models that are on the market today.

The spool is made with a very well-balanced design that ensures you won’t have the line collected on one side or the other. Thanks to the double anodized aluminum spool’s U-shape, you can expect the spool to have great balance and to spool the line up in an even fashion that helps protect against pesky tangles that often occur from an unbalanced spool. Another factor that helps to get the line onto the spool properly is the Zirconia line guide. This guide system moves across the length of the spool, feeding the line over it in an even manner to help prevent problems in your casting or retrieve.

Another factor that clearly stands out about the Mach II is the oversized handle. This is made to help you maintain control over the retrieve and keep a high rate of speed when you need to. The Winn Dri-Tac knobs give the reel a somewhat comical design, but these will actually go a long way in helping you keep your grip and reel up a large amount of slack when you need to.

The Lew’s Mach 2 reel comes in two models – left and right handed. Let’s have a look at their individual specifications:

The Lew’s Mach II is ideal for a wide range of tactics that involve the angler having to reel up a considerable amount of line in just a few cranks of the handle. Pitching jigs around docks and into heavy cover are one of these tactics and you’ll probably find the Mach II to be exceptionally well-made for this technique. The reel is very easy to maintain and offers a good all-around level of quality in virtually every aspect of a baitcasting reel. If you’re looking for a good blend of speed and performance, this is likely to be worth the investment.