Okuma has made quite a splash in the fishing industry since it was first established in 1987. Being a company that’s based in Japan, Okuma didn’t truly make much of an impact on anglers in the United States and other parts of the world until online business began driving their sales and more people started taking notice that this was a brand that had great potential. Now, Okuma is one of the more highly-regarded brands in the industry and has a reputation for making rods and reels that offer great quality at a reasonable price.

One of these particular products is the Okuma Stratus VI Spinning Reel, which is a more lightweight spinning reel that’s geared toward freshwater fishing. It’s made with quality components and priced at a level that most anglers can usually afford, which makes it extremely popular with beginners and anyone who wants a decent reel that won’t require them to break the bank.

In this article, we’ll take a closer look at the Okuma Stratus VI Spinning Reel and why so many anglers prefer it over other brands and models when it comes to spinning reels. 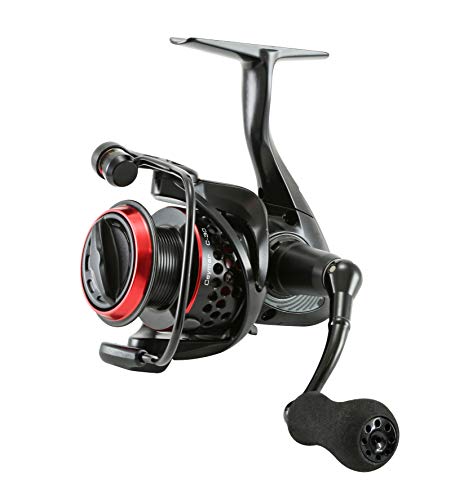 For most avid anglers, spinning reels are typically used in certain scenarios when they might be fishing with a finesse rig or smaller tackle items. Other anglers religiously stick with spinning reels as they provide a much easier fishing experience than you might normally get out of baitcasting reels. Okuma has been making capable spinning reels for more than three decades now and the brand has certainly caught the attention of most people in the fishing industry.

Okuma can be compared to some of the other more popular brands in the fishing industry as it is one that consistently produces solid products that are priced at a very reasonable level which most anglers can afford. The Okuma Stratus VI Spinning Reel is another reel that fits this description as it is lightweight, yet durable enough to hold up against hard-pulling fish that will put quite a strain on your reel.

The reel can be purchased in a variety of different sizes that range from the smaller 10 size all the way up to a larger size 65, which is comparable to a 6000 or 6500 size reel using other brands’ measurement systems. The reel can be set to a right-handed or left-handed retrieve based on each anglers’ own preferences. It comes in a distinct black, white and silver color combination giving it a very sleek appearance that plays into the Okuma Stratus VI Spinning Reel’s ergonomic nature.

Despite being priced well below what most other brands’ mid-level spinning reels are, the Okuma Stratus VI Spinning Reel is available at a rate and is also packed with impressive features and quality components. It has a great line capacity, smooth cast and retrieve and plenty of power to handle just about any type of fish you want to go after in freshwater or saltwater environments.

Okuma set out to make the Okuma Stratus VI Spinning Reel as lightweight as possible while still adhering to the high standards and durability that their products are known for. The reel’s body is made of a very lightweight graphite material that’s still strong enough to allow you to catch and land bigger sized fish that often test the limits of any type of material. This graphite material is specially made to give you enough toughness, but it’s also geared toward being corrosion-resistant, which means you can rest assured that saltwater won’t eat away at the reel’s housing or other parts over time.

The Okuma Stratus VI Spinning Reel also sports a machined aluminum spool that’s tough enough to handle just about any size fish you want to catch outside of the massive tuna and marlin that roam the offshore waters of the world’s oceans. This aluminum spool is precisely machined so that the line spools onto your reel with very little trouble, allowing you to fish with braid, mono, or fluoro fishing line using the specific pound test you choose.

The reel is also made with a rigid flat bail wire which is made to give you plenty of durability without weighing the reel down too much. This bait is a bit thicker than most other brands and models and gives a satisfying ‘click’ sound once it has been fully opened, allowing the angler to make his or her cast without the possibility of the bait closing unintentionally.

The Okuma Stratus VI Spinning Reel offers enough smoothness in both casting and retrieval to please most anglers. It’s not quite as smooth as most of the premium-quality spinning reels that cost double or triple the amount that you’ll pay to purchase the Stratus VI, but it’s more than adequate considering the overall price.

This reel is made with a 6+1 stainless steel ball bearing system that’s made for smooth performance in both freshwater and saltwater environments. This system includes 6 ball bearings and one rotor bearing to help eliminate much of the friction that’s caused by the reel’s spool and other internal parts working together. The great thing about this reel’s overall construction is that every part is manufactured with anti-corrosion properties so that it will hold up against the usual saltwater corrosion that often renders most other, lesser-quality reels useless after a period of time.

The Okuma Stratus VI Spinning Reel features a machined aluminum spool that is capable of holding braid, mono or fluoro line of any size and strength ranging from 2 pound test on the small 10 size reel all the way up to 20 pound test on the larger 65 size model. The spool is also designed to hold quite a bit of line on each size with the largest being capable of spooling up to 430 yards of 12 pound test monofilament line.

Anglers who are fond of using spinning reels typically expect enough speed to utilize a good variety of lures on a lightweight option such as the Okuma Stratus VI Spinning Reel. It’s not designed with blazing fast speed, but it does offer an adequate 5.0:1 gear ratio on the 10, 30 and 40 size models. The Stratus VI comes in a 4.5:1 in its 55 size reel and a 4.8:1 in the larger 65 version.

Compared to other reels in its class, the Okuma Stratus VI Spinning Reel offers exceptional performance and a great feel. Anglers will also be pleased to know that this reel is made with a quick-set anti-reverse bearing that ensures your spool won’t allow fishing line to be taken off the reel unless you intend for it to be. This is a very important part of any reel that’s going to be used in going after larger-sized fish which usually tear off a considerable amount of line and might require you to reposition your grip or make minor adjustments to the drag or other parts of the reel while you’re fighting the fish.

The reel’s Elliptical Gearing system is another point of interest that helps to cut down on the friction while giving you a tight and precise feel when reeling in your lure or any fish you happen to catch using the Okuma Stratus VI Spinning Reel.

The Okuma Stratus VI Spinning Reel is made with the brand’s Cyclic Flow Rotor technology, which is designed to eliminate the potential for saltwater corrosion and also eliminate as much friction as possible while the reel is in motion. The Cyclic Flow Rotor technology does this by allowing air flow into the ported rotor, which allows the reel’s interior portion to dry much faster. This works to eliminate much of the risk of developing saltwater corrosion as a reel that’s capable of drying faster tends to be able to better combat corrosion over time.

This reel is also made with a precision machine cut brass pinion gear that helps alleviate the overall friction of the reel’s action while lessening the amount of weight at the same time. Another reason why so many anglers prefer this mid-level spinning reel to the other models made by more popular brands is the fact that its drag is very smooth and capable of handling a wide variety of fish species including saltwater and freshwater.

If we were to rate this reel on a level of 1 to 10 based on its features, capabilities and price, it would be very close to a 10. There’s plenty of reasons to view this as a great fishing reel and anglers have found that the Okuma Stratus VI Spinning Reel can have a wide variety of applications in both saltwater and freshwater fishing.

The smaller 10 size version is perfectly-suited to be used on ultralight rods for small species like trout or panfish and the larger sizes are great for catching larger saltwater fish around coastal flats and even in the surf. If you’re looking for a great quality spinning reel that can be used in any fishing environment that won’t require you to spend more than $50, the Okuma Stratus VI Spinning Reel is an outstanding choice that should be considered.