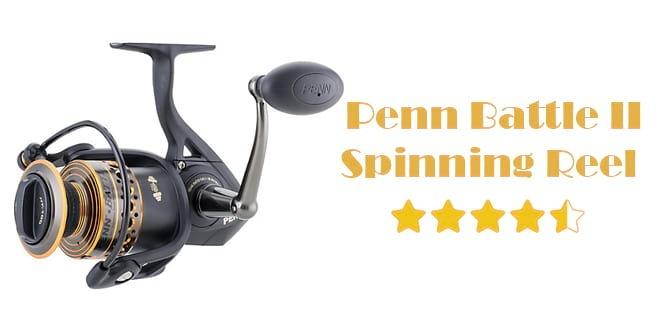 Don’t let the weight of Penn’s Battle II spinning reel trick you – this reel is no lightweight.

The Battle II range is a solid workhorse reel that suits freshwater and saltwater anglers.

Penn has managed to make a well-engineered, high-quality, reel with the smallest models weighing in at just one pound. But beware - the bigger Battle II models weigh significantly more.

Penn is known for their durable, well-built gear. The Battle II line is no exception with a full metal body and side plates covering the rotor and aluminium bail wire.

The build quality makes it well suited to saltwater fishing as well as for freshwater anglers.

The Battle II feature HT-100 carbon fiber drag washers that are designed to withstand hundreds of miles worth of fishing line drag. HT-100 washers are carbon fiber fabric laminated on fiberglass. Although Penn was amongst the first to use carbon fiber for washers these types of products are more widespread in the industry now.

For the Battle II the use of carbon fibre, along with the reel’s high-quality build is up to 30 lbs.

The lightweight nature of the Battle II’s smaller models mean it can be a casting dream in good weather. But a nightmare when the weather gets wild.

The smaller reels weigh just one pound, so casting is easy and simple in calm waters. But if the winds gets up that light weight could be your undoing. While the Battle II’s small reels are light, the top end of the range is much heavier and could flip this issue on its head.

The reel’s line capacity rings are a handy way to quickly check how much line you have out when trolling or long casting, or even a way to ensure you’ve put the correct amount of line on your reel.

The Best One of Spinning Reels

What is the weight of the reel?

The smallest Battle II’s weight just one pound. But the biggest end of the Battle II range can be much heavier

How many ball bearings are there in the reel?

Is the device attached with another spool?

What is the casting limit in the device?

How much weight the device can drag?

The Battle II range are great workhorse reels that can suit many situations. Well built and durable, the inclusion of HT-100 carbon fibre washers means this reel is built to last. It has a good maximum drag weight of 30 lbs.

The smallest Battle IIs are very lightweight, but that changes at the biggest end of the range which can be much heavier.

Russ is an avid angler. He has fished all over the world, primarily for Saltwater game fish but also for local prize fish. Russ writes reviews for all of his fishing gear to help others achieve their own fishing goals. His favorite reel is a Shimano Tyrnos for an overhead reel or a Shimano Curado for a baitcaster. His dream is to catch a Black Marlin.