When it comes to purchasing budget-friendly fishing reels, it’s very important that you very closely inspect the features and characteristics of the product before making your purchase. Some brands are well-known for producing good products for just a fraction of the cost other companies might charge for a reel that’s very much the same in a number of ways. Piscifun is one brand in particular that has a stellar reputation in the fishing industry as it relates to affordable fishing gear.

The Piscifun brand is relatively new after having been established in 2013. Many of their products have drawn widespread applause from anglers all over the world, especially those who are beginners and novice fishermen and women who want to start out with gear and tackle that won’t require them to break the bank.

In this article, we’ll take a closer look at one of the brand’s most popular spinning reels, the Piscifun Flame Spinning Reel and discuss some of its more notable features and performance capabilities. 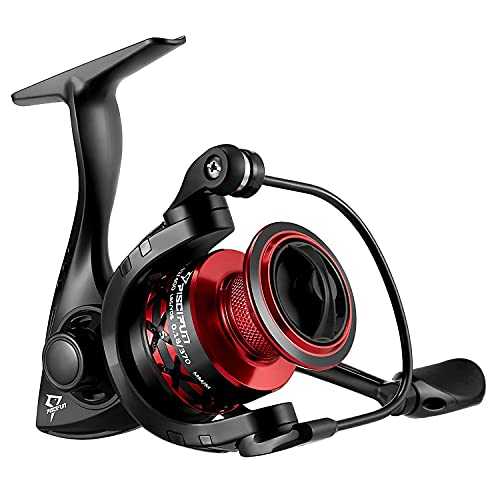 The name Piscifun is derived from the Latin word ‘Pisci’, which means fish, and the word ‘fun.’ The brand’s mission statement includes a goal of making fishing fun and affordable again, which they manage to do quite well. While it’s understandable for seasoned expert anglers to focus on products that provide them with the best possible technological and mechanical advantage, it’s also important for certain companies to remember that there are a number of anglers out there who just want a decent rod and reel that they won’t have to spend a small fortune to acquire.

The Piscifun Flame Spinning Reel has an elegant appearance that’s a nice blend of red and black tones and an overall design that certainly doesn’t indicate that it’s one of the cheaper options you’ll find in today’s market. While the brand manufactures higher quality reels that cost more than $50 or $100, you can typically find the Piscifun Flame Spinning Reel for less than $30 in most cases.

Piscifun makes the Flame Spinning Reel in four different sizes that include a smaller 2000 model, as well as a 3000, 4000, and 5000 size reel. Each one is reported as having quite a bit of smoothness in the retrieve, which is due to the Piscifun Flame Spinning Reel’s 9+1 ball bearing system. There is a minor amount of play in the handle when you’re reeling and fighting fish, but it’s not likely to be enough for beginner or novice anglers to notice.

These reels are considered to be some of the more interesting lightweight spinning reels that are built to withstand the rigors associated with saltwater fishing. That means the Piscifun Flame Spinning Reel is a great choice for beginners or even kids who want a solid reel that they can use in any type of water for a wide range of fish species.

Despite having a very reasonable price, the Piscifun Flame Spinning Reel is a very well-made product that the brand incorporated quite a bit of engineering to produce. It’s considered to be a lightweight fishing reel, but offers a fairly powerful drag, especially compared to other reels that are similar in price and overall features and capabilities.

The Piscifun Flame Spinning Reel is made of dense graphite material that is not quite as tough and durable as metal alloy material, but still quite capable of withstanding the high pressures and strain associated with reeling in a sizable fish. These reels aren’t necessarily well-equipped for anglers to handle monster-sized striped bass or other giant saltwater fish species, but you should have no problem catching and landing most small to medium sized fish.

This graphite material is strong enough to hold up against most fish species, but its main purpose is to give the Piscifun Flame Spinning Reel a more lightweight overall feel than others in its class. Most brands that produce affordable reel models make them with metal frames that sometimes reduce the smoothness when it comes to the reel’s retrieval. The graphite material helps this to an extent and is also designed to withstand any saltwater corrosion you might normally see in a reel like this.

The Piscifun Flame Spinning Reel is made to be a more affordable model that most anglers, regardless of skill or experience leve, can afford. It’s also equipped with a surprisingly powerful drag that allows anglers to confidently go after larger sized saltwater and freshwater fish, as well as any that are known to be hard-pulling species. The Flame’s drag system offers a max drag capability of up to 20 pounds in the largest 5000 size model.

It must be noted that this drag is advertised to deliver a higher max drag weight, but many anglers have reported that it sometimes comes up short in regards to handling those tougher fish that really test the drag.

You might expect to experience some slipping if you have a larger-sized fish on that truly tests the max capability of the drag with the particular size reel you’re using. However, the Piscifun Flame Spinning Reel’s triple-drag washer design helps make it somewhat smooth in comparison to other reels in its class.

All four of the Piscifun Flame Spinning Reel’s reel models each deliver a 5.2:1 gear ratio that is mostly designed to allow you more cranking power than anything else. You shouldn’t expect this reel to have the same blazing-fast speeds in retrieval and it does leave a bit to be desired when it comes to the distance that it’s capable of casting most lures.

Most anglers likely would prefer a slightly faster gear ratio, but the 5.2:1 is adequate for most types of freshwater and saltwater angling. The Piscifun Flame Spinning Reel is described as being somewhat smooth in terms of retrieval and casting, but it’s about what you might expect for a reel at this price point.

One of our most favorite things about the Piscifun Flame Spinning Reel is that the brand made efforts to build this reel with corrosion-resistant gears and internal parts, as well as the frame and certain external parts. The main gear drive is made of zinc, which gives it good overall strength, but also means that you won’t have to worry about the potential for saltwater, sand and other grime to make its way into the inner workings of the reel and ruin its mechanical precision.

Keep in mind that you’re not dealing with a premium-quality reel that’s made with a fully-sealed design. The Piscifun Flame Spinning Reel does have some slight vulnerabilities in terms of areas where saltwater might be able to work its way into the reel. This means that it’s a good idea to properly clean the reel and keep it oiled and well-maintained after using it in saltwater fishing environments for a few days.

The Piscifun Flame Spinning Reel offers a spool that’s made out of aluminum material, which means it’s strong enough to handle most types of fish and is also capable of being spooled with braided line without the need for any backing material. This braid-ready aluminum spool is another one of the reasons why many budget-minded anglers view the Piscifun Flame Spinning Reel as a true gem in terms of its overall features and characteristics compared to the affordable price it’s offered at.

Another notable aspect about the spool is that it’s capable of holding up to 400 yards of 12 pound test braided line on the smaller 2000 size model, as well as 330 yards of 5 pound monofilament fishing line. The largest 5000 size reel is able to be spooled with 165 yards of 60 pound braided line and up to 110 yards of 30 pound test mono line.

The Piscifun Flame Spinning Reel is a great choice of reel for any beginner or novice anglers who are looking for an easy-to-use reel that won’t break the bank. The Piscifun brand certainly lives up to its reputation with this one as it makes sure the focus of the reel’s characteristics and capabilities is on providing a simple and fun fishing experience.

If you’re in the market for a budget-friendly spinning reel that can be used for a variety of different species in both saltwater and freshwater, the Piscifun Flame Spinning Reel is definitely one that we’d recommend considering.