The Shimano Chronarch Reel has been one of the brand’s headline models for nearly 30 years. The Chronarch has been one of the best lightweight low profile baitcaster reels in the last few decades in terms of reliability and smooth casting and retrieval. For many anglers, it doesn’t get much better than this and it’s hard to find a better low profile baitcasting reel that offers the same basic features and performance elements the Shimano Chronarch MGL Reel does.

Shimano has done a major overhaul of their baitcasting reels in the last few years and the Chronarch was one of the reels that was subject to a number of upgrades. Based on a number of factors, the Shimano Chronarch MGL Reel might still be considered the gold-standard of super lightweight low profile baitcasting setups in today’s fishing industry. 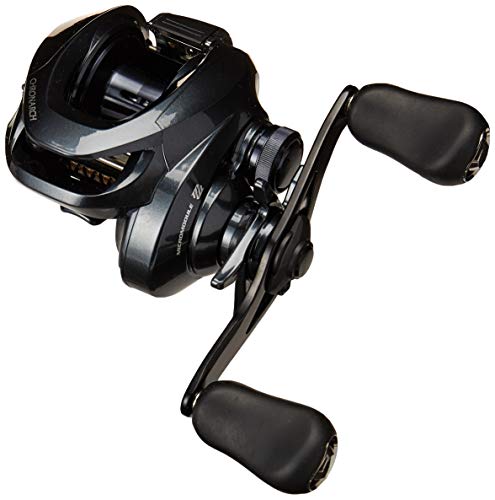 For many years, the Shimano Chronarch MGL Reel has been a favorite among tournament anglers and professional fishing guides for a number of reasons. The recent additions and upgrades made by Shimano have all been very well-received by anglers who are fans of the brand and who have used the Chronarch reel in the past. With these upgrades, the Shimano Chronarch MGL Reel is still one of the lightest low profile baitcasters you’ll find in the today’s fishing industry, but it can now cast farther and is also smoother than ever before.

The additional bearing helps anglers throw their lures quite a bit farther than ever before while also increasing the Shimano Chronarch MGL Reel’s buttery-smooth feel when it comes to casting and retrieval. There are 6 different models within the new Chronarch MGL Reel family, including the MGL 150, MGL 150HG, MGL 150XG, MGL 151, MGL 151HG, and the MGL 151XG. Each of these reels possess the same feather-like lightweight feel that the Chronarch is known for, but they all differ in terms of gear ratio quite a bit.

When we step back and take a look at the Shimano Chronarch MGL’s new upgrades, as well as well as the other features and performance capabilities that it’s known for, it’s easy to justify spending nearly $300 on this model. Let’s take a closer look at some of these features in greater detail.

The Shimano Chronarch MGL Reel is made out of the carbon composite material known as Ci4+. This material is said to be the same as what was used in the previous version of the Chronarch, but the newer material is built to be somewhat more rigid according to most experienced anglers who have fished with both versions of the Chronarch.

The overall look of the reel is virtually identical to the previous Shimano Chronarch model and the carbon composite material helps provide more than enough rigidity while tipping the scales at less than 7 ounces for even the largest version of the Shimano Chronarch MGL Reel. One of the only downsides to the reel is that its’ not made to handle the usual corrosive properties that comes from saltwater exposure.

One of the most popular features of the Shimano Chronarch MGL Reel is the SVS Infinity Braking system. While it’s very important for any mid-to-high level baitcasting reel to have a good braking system, the SVS Infinity feels much more like what you find in the higher-end reels that cost upwards of $500.

This braking system is designed to be very easy to manage and manipulate. Anglers have the ability to maintain consistent spool control and to apply more brake force just by turning a small dial. Shimano engineers designed this system using brake weights that use the inner friction against the spool during the cast.

This means you’re able to control the spool, even when casting very small, lightweight lures. If you change lures and want to adjust the braking system accordingly, you only need to turn the dial to the right level. The levels range from 1 to 6 with each level increasing the braking level with each increasing number (6 being the highest). The ability to easily manipulate your braking system also helps anglers adjust to compensate for wind.

Thanks to the MicroModule Gear system, the Shimano Chronarch MGL Reel is arguably the smoothest mid-level reel you’ll find in today’s fishing industry. This system is basically made with smaller, more precise teeth that fit together more tightly which results in greater precision and overall more contact points between the drive gear and pinion gear.

This system is what makes the Shimano Chronarch MGL Reel feel so incredibly smooth and also makes casting and reeling virtually effortless compared to some of the other reels that anglers claim to be comparable to the Chronarch MGL lineup.

Another popular feature that the Shimano Chronarch MGL Reel offers is the Cross Carbon Drag system. Unlike other reel models’ drag systems, this one is designed with better-quality components and also offers a wider range of drag settings as well. Shimano advertises this drag system to be among its smoothest ever.

Each one of the Shimano Chronarch MGL Reel models is made to have a max drag weight of 11 pound. However, the two faster XG models are designed to offer 10 pounds of max drag weight. This is likely to be enough for most bass anglers, but the 11 pound max drag is likely not enough for anglers who want to target larger freshwater species such as striped bass or musky.

The Shimano Chronarch MGL Reel is designed with the S3D Spool, which goes a long way in decreasing the amount of friction that’s produced when you make each cast. The S3D Spool is designed with a balanced and thin wall aluminum spool that features plenty of line capacity on each version of the Chronarch reel.

The Shimano Chronarch MGL Reel derives its name from the Magnumlite (MGL) Spool system. This MGL spool is specially designed to reduce the inertia that’s caused when you make each cast. This reduction results in longer and more accurate casts, no matter what size lure you’re using.

This new MGL design is easily one of the best ever from the Shimano brand. The SVS Infinity Braking system combined with the Magnumlite technology and engineering makes this reel feel even more smooth than the brand’s previous model, even though it’s hard to imagine getting more smooth than the Chronarch Ci4+ baitcaster.

Many anglers compare the smoothness and performance of the Shimano Chronarch MGL Reel to the brand’s Curado DC reels. When it comes to being smooth and easy to cast, it’s hard to beat this one unless you’re willing to shell out more money and purchase one of the high-end models that are priced well over $500 in most cases.

For anglers who want a high-performance low profile baitcasting reel that is nearly as lightweight as you can get, it’s hard to look past the Shimano Chronarch MGL Reel. The reel has an incredibly comfortable feel as it fits in your hand and it’s arguably one of the most accurate low profile baitcasters on the market today.

It might leave a bit to be desired in terms of its max drag capacity, but the Shimano Chronarch MGL Reel makes up for any potential shortcoming in the overall smoothness of the casting and retrieval ability. When we factor in the price of the Shimano Chronarch MGL, it’s easily one of our favorite reels ever made by Shimano and possibly one of the best reels on the market today that’s considered a mid-level baitcaster.