Serious saltwater anglers require the best possible gear and equipment on the water. In many cases, professional anglers, guides and charter captains must rely on their tackle and gear to make a living, which means they often don’t cut corners and are more willing to invest a bit more on their fishing reels to get the best possible product. The Shimano Stella has been named among the best of the best when it comes to saltwater spinning reels.

The Stella is absolutely packed with premium features and capabilities that make it an obvious choice for anglers who want to have the best possible gear to bring in their catch. Many saltwater fishing magazines have pointed to the Shimano Stella as the premier saltwater spinning reel on the market today.

In this article, we will explore why the Shimano Stella has received such high praise and take a closer look at each of its features to help you understand why it’s considered to be the best of any other reel model in the fishing industry today. 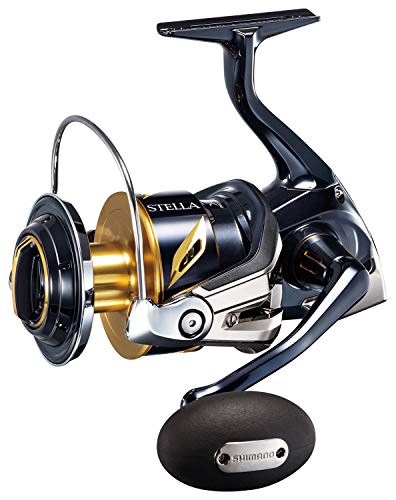 One of the first things that the average angler will likely notice about the Shimano Stella is the fact that it features a hefty price tag. This might drive most anglers away, but those who are seriously seeking the best spinning reel on the market already know that the best products are always worth a much more significant investment.

The Stella has been around for nearly 30 years as it was first introduced in 1993 by Shimano. Since then, the brand has used customer feedback and testing to hone in different areas and features on the reel so that it functions to a much higher degree and is more capable of giving you the best opportunity to bring in your catch than ever before.

The reel comes in 8 different size options that let you select the one that’s just right for your needs, whether you’re just doing some inshore fishing, or you are in need of a larger, heavy-duty offshore reel that is capable of bringing in mako sharks and marlin. The sizes range from the standard 5000 model up to the massive 30,000. You can also order the Shimano Stella in three specialized versions that include the PG (power jigging), the HG (high gear), and the XG (extreme gear).

As you might expect with a reel that’s anything close to the same caliber as the Shimano Stella, the housing and side plates are made of extremely tough metal that’s known as the Power Aluminum Body. This heavy aluminum body increases the overall weight of the reel, which might take a bit for some anglers to get used to, but most will quickly find that it is just right for going after the monster size saltwater game fish species that trophy fishing is all about.

The Shimano Stella offers the widely-praised X-Tough Drag system, which is more than capable of giving you the power you need to handle the largest sized fish in the ocean. The different reel sizes offer drag weights that start at 29 pounds in the 5000 model and move up to as much as 66 pounds with the Shimano Stella’s 30,000 size reel.

This drag is exceptionally tough and will make fighting the hardest-pulling fish in the ocean like amberjacks, sharks, and tuna much easier. Instead of allowing the fish to rip off massive sections of line as they dart and dive away from your boat, you will be able to maintain a greater amount of control over them and bring them in much faster than ever before thanks to the X-Tough Drag System.

The Shimano Stella offers the brand’s X-Ship gear system, which is also designed to allow you to confidently go after the biggest and meanest fish in the ocean without fear of having your reel’s gears stripped out by a fish that’s simply too large. The X-Ship technology system utilizes two bearings that are each located on either end of the pinion gear.

These two bearings give a much greater level of support to the reel’s overall toughness and you’ll be able to reel in massive fish that might otherwise be too large for lesser quality reels. These extra bearings help to keep the reel’s pinion gear and other internal components in alignment, which means your reel won’t bog down when you’re fighting a monster tuna or other species of fish.

The Shimano Stella also offers Paladin gear durability enhancement, which is aimed toward providing a greater level of smoothness to casting and reeling your catch in thanks to a cold-forged aluminum drive gear that’s made of hardened brass material. This means that the Shimano Stella still has the same classic smoothness that this brand has long been known for.

Shimano has also fitted their Stella reel with a Super Stopper II roller bearing system that functions in a way that lets you instantly set the hook on your catch without having to deal with the same amount of looseness in the reel that other brands are notorious for having. Simply put, the one-way roller bearing addition helps to stop the gears inside the reel and give you the instant ability to get the hook deep into the fish’s mouth so that it won’t pull free, resulting in you losing your catch.

The Shimano Stella’s designers went above and beyond when it comes to waterproofing the reel’s internal components. This reel features the brand’s patented X-Shield and X-Protect technologies, which are both designed from a series of O-rings and sealing gaskets that are guaranteed to lock out water, grime, sand, and other elements that often seep into the reel’s internal components and significantly lessen the overall lifespan of your reel.

What makes the Shimano Stella so much better than most of the other brands and models on the market today is the company’s attention to detail when it comes to the smallest factors related to the overall function of the reel. The reel is made to stack up quite well against the largest of ocean game fish species and offers plenty of added bonus features that are designed to help ensure that you don’t lose your catch, or that the fish doesn’t pull the internal gear system loose and bog down the line.

While the Shimano Stella is significantly more expensive than most other reels in the fishing industry today, there’s no denying that this model offers everything you need for success on the water.