Shimano is one of the biggest brand names in the outdoor industry and it’s no secret that their fishing rods and reels are second to none when it comes to quality and performance. The Shimano TLD Conventional reel is a model that anglers of all skill and experience levels can appreciate. It offers a lightweight feel that’s made to the same high standards that Shimano products are known for.

The TLD Conventional reel derives its name from the Triton Lever Drag system that is the central feature of this product. It’s made to serve as an offshore fishing reel that’s capable of tackling a variety of game fish species of all shapes and sizes. It’s priced at a rate that’s relatively affordable for just about any angler and offers plenty of value that other brands simply can’t match. As any other conventional reel, this model is suitable for trolling, bottom fishing, jigging, and other methods of offshore fishing.

On the surface, it might be hard for novice anglers to see and understand just what’s so valuable about the Shimano TLD Conventional reel, but a closer look into the features and capabilities of this particular model should make it clear that this is a solid choice for beginning anglers who are looking to step their game up, or for experienced veteran fishermen and women who want to add to their angling arsenal. 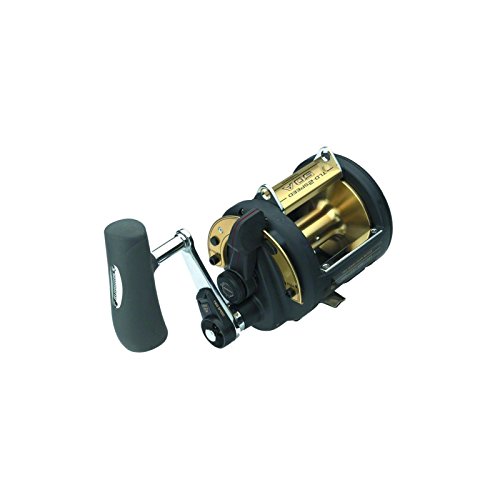 Click here to learn more about how we score.

This reel is one that garners high amounts of praise from users for its lightweight qualities, as well as the fact that it is very reliable. The TLD is priced at a rate that’s really a fraction of most premium fishing reel models that are available today. This rod might not have a high amount of impressive features like other brands do, but anglers can appreciate that these are made to serve as single or two-speed lever drag reels that provide a high level of performance.

The TLD operates at a higher level than other reels of similar size and type through the use of high-quality bearings that eliminate a great amount of harmful friction from the reel’s internal parts. The reel housing is made with a lightweight, yet highly durable graphite material that’s also present on the sideplates of the Shimano TLD.

It’s available in three different models that offer various sizes, weights, and gear ratios so that anglers can select the option that’s right for their own needs when it comes to offshore fishing. The reel also features a durable aluminum spool, as well as a high-quality drag system that puts the angler in control of their fishing rod and reel despite what type of fish species might be on the end of their hook.

Without a doubt, the central feature of the Shimano TLD Conventional reel is the Triton Lever Drag system that it is named after. Anglers can choose between a single or two-speed model that range in overall weight from 18.6 to 24.5 ounces. Shimano is known for producing reels that offer exceptionally well-made and high-performance drag systems.

The three different single speed drag models of the TLD Conventional are designed to function with monofilament or braided line for optimal performance. Depending on which type of line the anglers decide to use, they can spool their reel with more or less amounts of braided or mono fishing line. The single speed models feature either a 3.6:1 or 4.0:1 gear ratio.

For anglers who expect to go after and catch larger game fish species, the two speed TLD model is more appropriate. These models are made to be slightly larger than the single speed versions and are capable of being spooled with a heavier fishing line that can either be braid or monofilament.

The two speed model offers a max drag range of 30-42 pounds, according to Shimano’s website. These reels are much more ideal for serious saltwater anglers who plan to catch large game fish species that might often tear the gears out of a lesser-quality model. Gear ratios for the two speed models are the same, but anglers have the option to switch over to a much more powerful 1.7:1 gear ratio that’s better for fighting monster fish that are often much heavier than the average inshore catch.

The internal components of the TLD Conventional reel are designed to provide enough performance and power for offshore anglers that typically land bigger, more powerful game fish species. The reel is also made to be less susceptible to saltwater corrosion in the same way that other reels might be, but some users have reported that it’s highly important to regularly clean and service your TLD Conventional reel to avoid the effects of saltwater corrosion.

The reel is crafted with anti-rust bearings to help alleviate any corrosion while also featuring titanium washers that are also capable of lasting much longer than other models. In addition to these components, the reel also offers stainless steel main shafts and gears that also help to guard against rust and corrosion.

If you want to see this reel in action then have a look at this review by The Fish Locker Workshop:

The Shimano TLD Conventional is made to be a reel that series offshore anglers can rely on to function as a solid all-purpose reel that can be used in trolling, bottom fishing, jigging, or other techniques. The reel is designed to be more lightweight than other models, which should appeal more to novice anglers. Seasoned experts, however, likely know that a reel which features graphite housing and sideplates isn’t going to be as strong as other materials.

Despite the fact that it might lack the same level of toughness that other premium models offer, the Shimano TLD Conventional is a reel that provides plenty of value and can be the perfect choice for intermediate level anglers who want a product that will perform well in an offshore setting.