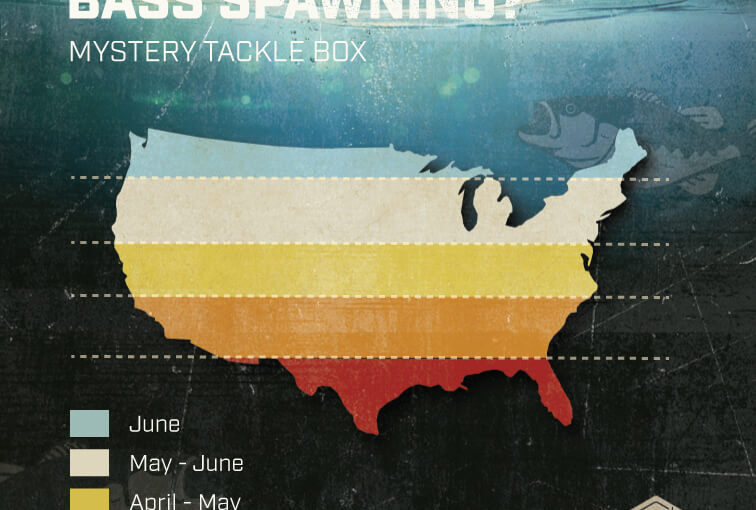 The bass spawn is one of the most exciting times of the year for anglers across the United States and other countries where these types of fish flourish. The timing of this spawn is something that occurs around the exact same month, depending on where you’re fishing. Anglers who are willing to put in a bit of research and collect information from their local fishery or area will be able to pinpoint the best times of the year to target spawning bass in their neck of the woods with great accuracy.

Bass will behave in a certain pattern once the water temperature in their lake or river reaches the optimal range for them to begin their annual spawning ritual. Understanding when bass start to engage in their usual spawning activities is key in being able to predict just when and where they will be at any given point, as well as when you can catch them with a bit more ease than other times of the year.

In this article, we’ll discuss some of the ways that anglers can search out bass behavior and recognize specific indicators that the annual spawn in taking place, or soon will be.

The Beginning of the Bass Spawn

As the winter temperatures begin to give rise to the warmth of spring each year, various species of bass will migrate from the depths of the given lake or river where they live into the shallow regions of that waterway to engage in the annual spawn. What starts this incredible sequence is all about water temperature more than anything else.

When the water temperature at a given area reaches about 55 degrees Fahrenheit, bass will begin certain activities that will play a bigger role later on in the spawning season depending on whether they are male or female. The timing of this increase in the water temperature varies from state to state as the climate can vary widely across much of the United States.

The beginning of the bass spawning times in southern states like Florida and Texas will occur much earlier in the year than states that are farther north and who experience much colder temperatures throughout the year. Keeping a close eye on the water temperature in the specific body of water you plan to fish.

Conditions that Play a Role

In addition to the water temperature being at or very close to 55 degrees, anglers should also pay very close attention to a few other factors that will drive bass behavior at different times of the spawning season. The moon phase is another aspect that can play a major role in the timing of when bass will begin their spawn.

For anglers who are looking to take advantage of large female bass and some of the males feeding more heavily in preparation for the spawn, this will generally occur when the water temperature reaches a level of about 50 degrees. At this time, bass will typically prowl the areas around points and coves of large reservoirs looking for shad and other types of small baitfish that they can easily ambush and make an easy meal out of. Bass will typically feed on anything they can find until the water warms to at or near 60 degrees, which is when they will usually lay their eggs and stay on the bed with them for a few days or weeks.

Where Bass Will Spawn?

Bass will always seek out areas that are especially flat or shallow and offer plenty of cover for their eggs in most cases. They select these shallow areas in any given lake or river because it minimizes the amount of water surrounding the eggs and lowers the chance for predators to take advantage of an easy meal.

The males, which are usually smaller and more agile than the larger females, tend to venture into these shallow flats first to ‘fan out’ the bed and prepare it so that the eggs can be laid on the bottom. Anglers can spot these beds along the shoreline in shallow areas of any waterway they fish by searching for small patches of muddy water as the males will generally fan the beds out and disturb the water clarity for a few days.

As soon as the bed is ready, the female will come in and lay her eggs in the bed. This process doesn’t take long and the female will usually rest over the eggs, guarding them from attack from potential predators. The males will also usually stick at or very near the bed and be on patrol, looking for anything that could present a danger to the eggs.

When to Target Bedding Bass?

Fishing for spawning bass is easiest when bass are ‘on bed.’ This means that the female, which is much larger than the male, will be locked on top of the bedding area and will remain vigilant to ward off any potential attackers who try to steal the eggs as an easy meal. Anglers can typically spot these bedding bass very easily by scanning the water along areas that are especially flat and shallow.

Once you locate a bedding bass, move in carefully so as not to disturb it and drive the bass away. There are a variety of lures that can be used to get the attention of a bedded bass. Soft plastic baits are generally considered best as these won’t disturb the eggs to a great degree and will usually cause the female to strike at them in an effort to get the lure away from her eggs.

Once the females have finished guarding her eggs, she will immediately begin looking for food as she will typically not eat anything while guarding the bed. If you begin to notice empty beds along the shoreline, it could mean that these large female bass are not far away and will be eagerly searching for potential meals.

The males will remain in the bedding areas and will protect the small hatchling bass that are known as ‘fry.’ The large females will move into the cooler depths that are near their beds and will rest for a few days before returning to form and will begin actively feeding again.