Zebco is a brand that’s widely considered to be a true classic in the fishing industry. Their products are easily the most popular when it comes to beginner and novice anglers as the Zebco 33 and a few other models are solid spincast models that are very easy to use and deliver a hassle-free performance. One of those reels is the Zebco 202, which I will be taking a closer look at today.

Much like the legendary Zebco 33, the 202 model is one that’s very similarly constructed, but has a few slight differences. These differences don’t necessarily mean that one is significantly better than the other, but that it gives anglers an option to choose between the model they want based on certain design elements and slight differences in each one’s performance.

In this article, I will be examining the Zebco 202 and giving a full review of this classic reel and all its components, as well as what kind of performance you can expect to get out of it. 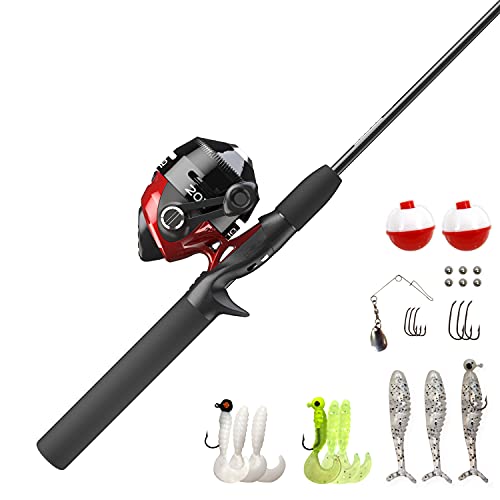 The Zebco 202 is another one of the brand’s mainstay models that has been around since the 1960’s. Zebco actually started out as a company that specialized in producing parts for oil drilling rigs, but one of their engineers came up with a spectacular design for a fishing reel that would greatly reduce the amount of backlash that anglers normally experienced with the reels that were available at the time. The reels went into production and were an immediate hit with everyone in the fishing industry.

First introduced in 1949, the Zebco 202 has stood the test of time and remains one of the highest-selling reels from the Zebco brand. There have been a few small alterations in recent years, but overall, this reel delivers much of the same reliable performance anglers want from the 202.

The Zebco 202 is a spincast reel, just like some of the brand’s other very popular models.

It’s a great option for anglers who like to fish in freshwater environments as the components of the Zebco 202 are just not very well-made to hold up against the destructive properties that can be caused by saltwater corrosion. This reel is one that’s geared toward fishing for crappie, largemouth or smallmouth bass, bluegill, walleye, and a load of other freshwater fish across the United States and the rest of the world.

The Zebco 202 is typically sold as a rod and reel combo, but we’re going to focus on the reel portion for this article as it’s really the most important part of the whole package. It can also be interchanged and fit onto a number of different rods for various freshwater fishing applications. One of the greatest things about the Zebco 202 is that it’s highly affordable and perfect for anyone who is just getting into the sport of fishing based on it’s price, as well as the ease with which it can be used.

Unlike the Zebco 33, the Zebco 202 is made with slightly less expensive parts to serve as a budget-minded angler’s dream reel. The front cover is made of plastic instead of the usual metal material that’s common with other Zebco spincast reels. The opening on the front cover, however it’s made of metal as it helps to reduce the amount of friction that comes from the line contacting the surface of the entrance ring.

The overall body of the 202 model is a bit more compact than the Zebco 33 and it’s one that’s very well-suited for kids and anyone who wants a smaller reel that’s a bit lighter and possibly easier to handle. The reel’s housing is typically made with a solid black coloring, although some Zebco 202 models in recent years have been made in black or red.

The reel comes with a stainless steel pickup pin that helps retrieve the line in a way that ensures less tangles and twists. This is the main feature that makes the Zebco 202 so valuable and functional among competing brands and models. The reason why the 202 reel model is recommended for kids and beginners is that you very rarely have to deal with the common frustrations and tangles that come with other affordably-made spincast or spinning reels.

The brand includes in the features listed about the 202 reel a Patented No-Tangle Design that virtually eliminates much of the usual headaches that come with cheaper fishing reels. Most of the internal pieces are made of plastic, however. This is an obvious downside if you’re very concerned with the reel’s durability, both inside and out.

The Zebco 202 reel features an all-metal gear system which is how it delivers the reliable nature that it’s really known for. Despite being made with budget-friendly parts on behalf of the manufacturer, the 202 reel holds together quite well and gives anglers a good amount of cranking power when needed.

The Zebco 202 offers just a 2.8:1 gear ratio, which is much lower than most other reels on the market. The main reason for building this reel with such a low ratio is to give the angler as much cranking power as they can based on the reel being made with internal parts that are mostly plastic and not quite as durable as the Zebco 33.

The reel does come with an instant anti-reverse capability that ensures your spool won’t be letting out when you don’t intend for it to. This is very helpful if you’re fighting a fish that’s a little bigger than what you’re used to and you might need to pause to adjust the drag or reposition your grip without letting too much line get away from the reel itself.

The Zebco 202 comes with a Dial-adjustable drag system which allows you to increase or decrease the amount of drag the reel has at any time while you’re using it. This is exceptionally useful for anyone that might be fishing for smaller species and happen to hook a larger bass or other type of fish that might easily strip away line from the reel. Once you dial in the right amount of drag, you can land most types of freshwater fish using the Zebco 202.

This reel comes pre-spooled with a 10 pound test monofilament fishing line, but it can be spooled with a variety of other types depending on how you want to use it. It’s not recommended to go much higher than about 15 pound test in most cases and you can spool line as small as 4 pound mono if you want to fish for trout or small panfish. The reel will hold roughly 110 yards of 10 pound mono line, which is more than enough for most types of freshwater fishing.

It’s a size 30 reel, which equates to a size 3000 for other brands. This is a highly versatile size that is great for anything from largemouth bass to bluegill and is one that is not too large for small children to use with relative ease.

This reel does have quite a bit of play in the handle and can also experience some drag slippage at times when fighting a larger-sized fish that pulls harder than expected. Nevertheless, the Zebco 202 delivers an adequate performance considering the fact that it’s made with parts that are not as durable as Zebco’s other, more expensive models.

There’s no denying that this reel is one of Zebco’s least expensive reels, but it does bring quite a bit of decent features and capabilities to the table. Most online retailers or tackle shops will sell the Zebco 202 for less than $20, which is a great deal that is meant to appeal to budget-minded anglers and beginners who simply don’t want to spend too much money on a decent fishing reel just yet. It has just the right components for young or novice anglers to enjoy fishing without having to worry about tangles or poor performance out of their fishing reel.